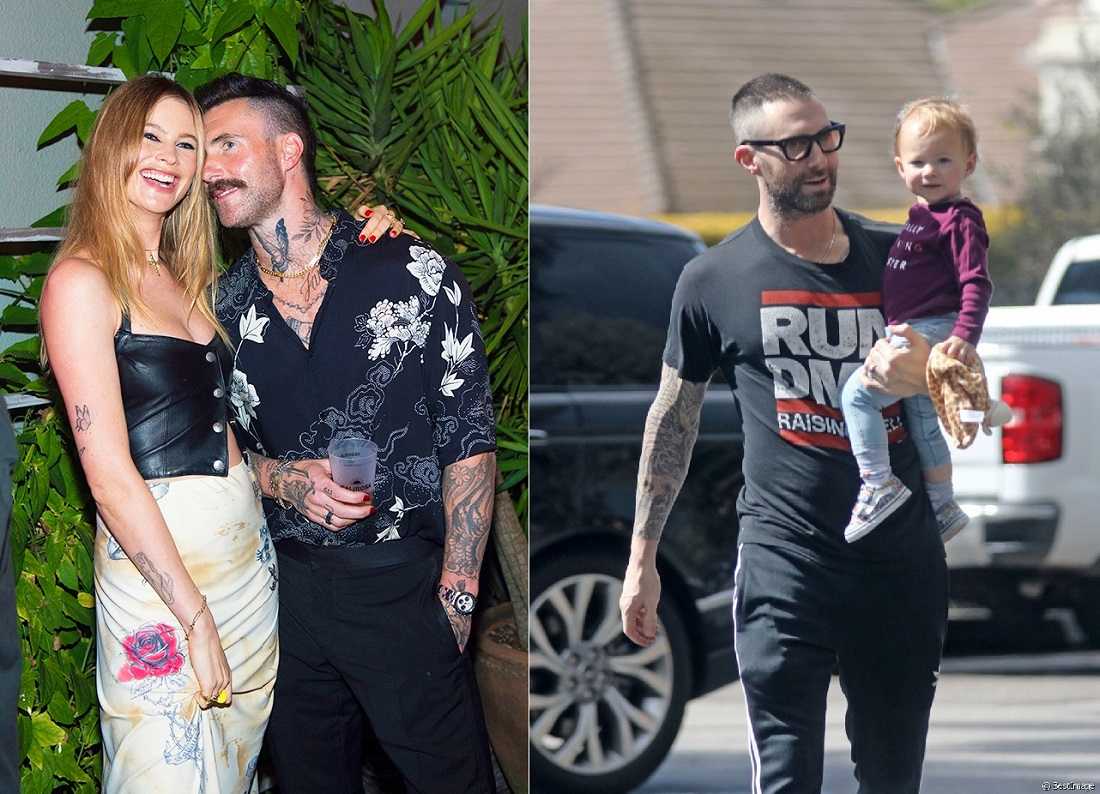 Who is Adam Levine?

Adam Levine is an American singer, songwriter and musician. He is known for being the lead vocalist and rhythm guitarist of the popular pop rock band “Maroon 5”.

Adam Levine considers himself Jewish, meaning he is spiritual but not religious. His maternal grandfather was Jewish while his maternal grandfather was a protestant. He also describes his family as a musical family and credits his mom for playing a huge role in his musical career. According to reports, Adam is the nephew of American journalist and author, Timothy Noah and television producer and writer, Peter Noah.

Adam Levine was born as the first of two children to his parents: Fredric Levine (father) and Patsy Levine – née Noah (mother). His parents got divorced when he was seven years old. His parents’ divorce took a toll on Levine and he eventually had to undergo therapy.

Adam Levine’s father, Fredric Levine is a savvy entrepreneur who is popular in the retail clothing business. He is the founder of the retail chain clothing “M. Fredric” with over twelve stores in Southern California. Fredric Levine has been the supplier of high-end men’s, women’s, and children’s apparel and accessories for over 30 years. He has also partnered with the American Cancer Society (ACS) in raising funds and awareness for breast cancer. He was formerly married to Patsy Levine (Adam Levine’s mom) in the early 1970s but they got divorced in 1986 when Adam was seven years old.

Adam Levine’s mother, Patsy Levine (née Noah) is an American entrepreneur and co-founder of “Your Mom Cares”, a mental health non-profit organization focused on children and adolescents. She has also worked as an admission counsellor in Los Angeles and New York. She retired in 2014 to devote her time to writing and charitable giving. She got divorced from her ex-husband Fredric Levine in 1986 and later remarried.

Before Levine’s parents got divorced, they had another son named Michael Noah Levine. Adam Levine’s father later remarried and he gained two half-siblings. He also has a step-sibling from his mother’s second marriage after she divorced his father. Altogether, Adam Levine has four siblings – one blood brother and three other half-siblings. They include Michael Noah Levine, Sam Levine, Liza Levine, and Julia Bartolf Milne.

Michael Noah Levine is Adam Levine’s gay younger brother. He is an American socialite and entrepreneur. Michael Levine’s exact age is not known but he is speculated to be in his late thirties as of September 2022. According to reports, Adam outed Michael as gay in a magazine in 2011. In an interview, Adam said his family always knew Michael was gay right from when he was two years old. Aside from this, no other information is known about him.

Sam Levine is the half-brother of Adam Levine from his father’s second marriage. He is a social media star and influencer. He was born on January 14, 2001, in the United States. He is 21 years old as of September 2022.

Liz Levine is the half-sister of Adam Levine from his father’s second marriage. Information about her birth date, year, personal life, and career path is currently unknown.

Julia Bartolf Milne is Adam Levine’s step-sister from his mother’s second marriage. Not much information is known about her.

As of the time of publishing this article (September 2022), Adam Levine is married to his wife Behati Prinsloo. The two started dating in May 2012 and got married in July 2014 in Mexico. After welcoming two daughters, Dusty Rose and Gio Grace, together, the couple announced on September 7, 2022, that they are expecting their third child.

Recently, the singer’s marriage made headlines he was accused of infidelity by Instagram model Sumner Stroh. As the rumours began to spread, Adam denied the relationship but later admitted to crossing a line.

Below is a list of the women Adam Levine has dated in the past. The list also includes his current wife Behati Prinsloo.

Jane Herman is known as the first girlfriend of Adam Levine. She is an American magazine editor and the founder of the fashion label “Only Jane Co”. Jane Herman was born on June 25, 1980, in the United States. She is 39 years old as of September 2022.

Adam and Jane Herman first met at a gas station in 1997 and, according to reports, they started dating that same year till 2001 when they broke up. His romance with Jane Herman was the inspiration behind Maroon 5’s debut album “Songs About Jane”. The album had tracks like “She Will Be Loved” “Harder To Breathe” and “This Love”. The hit track “This Love” was written about the day they broke up. The song was favourably received and is often cited as one of Maroon 5’s most successful singles. As of September 2022, Jane Herman is happily married to film director Marc Webb and together they have two children named Georgia and Walter.

Angela Bellotte is an American actress and event organizer born in West Virginia, United States. Her exact age is not known but she is speculated to be in her late thirties.

Adam Levine and Bellotte were first spotted together on a flight from Los Angeles to New York in September 2009. Weeks later, they were photographed holding hands at an event. However, the romance was short-lived as it ended less than a year later. To date, the pair has never addressed the cause of their split.

Anne Vyalitsyna is a Russian-American model. She was born on march 19, 1986 in Nizhny Novgorod, Russia. She is 36 years old as of September 2022.

Adam Levine and Anne Vyalitsyna first met in the spring of 2010 after the pop rock band Maroon 5 performed at a Sports-illustrated swimsuit party. Levine and Bellotte connected at the event and got to know each other. They hit it off so well the following year. In December 2011, during Victoria’s Secret annual fashion show in New York City, Maroon 5 performed their hit song “Moves Like Jagger” while Anne Vyalitsyna walked down the runway. On April 2012, Vyalitsyna’s rep confirmed to the press that the couple have decided to go their separate ways.

Anne Vyalitsyna said in a statement:

Adam and I have decided to separate in an amicable and supportive manner. We still love and respect each other as friends and I wish him all the best.

Behati Prinsloo is the current wife of Adam Levine. She is a Namibian model and Victoria’s Secret Angel. She was born on May 16, 1988, in Groot Fontein, Namibia. She is 34 years old as of September 2022.

Adam Levine and Behati first met through an email introduction by a mutual friend in 2012. They dated for a few months before splitting up in 2013. Interestingly, they quickly got back together and got engaged that same year. A year later, the couple tied the knot at Flora Farms, Los Cabos, Mexico in front of 275 guests including Robert Downey Jr and Adam’s Maroon 5 bandmates Jesse Carmichael and James Valentine.

In September 2016, Levine and Prinsloo welcomed their first child Dusty Rose Levine. Two years later, their second child, Gio Grace Levine was born. In September 2022, Behati Prinsloo was spotted on a vacation in Hawaii with her husband and two daughters showing off her baby bump. The couple later revealed they were expecting a third child.

As of the time of publishing this article, Adam Levine is the father of two children – Dusty Rose Levine and Gio Grace Levine – while expecting the third one.

Dusty Rose Levine is the first daughter of Adam Levine and his wife Behati Prinsloo. She was born on September 21, 2016, in the United States. She is 6 years old as of September 2022.

Gio Grace Levine is the second daughter of Adam Levine and Behati Prinsloo. She was born on February 15, 2018, in the United States. She is 4 years old as of September 2022.

A few days after Adam Levine and his wife Behati Prinsloo announced they are expecting a third child, the singer was accused of cheating on his wife by Instagram model Sumner Stroh. The model claimed Adam Levine had a physical relationship with her in 2012. She also went on to post a TikTok video laced with screenshots of the DM she claimed Adam sent to her. The model revealed she and Adam Levine dated for a year but lost contact until he messaged her on Instagram to ask her about naming his third child after her. Shortly after the TikTok video went viral, Adam Levine denied having an affair with the model but later admitted he crossed a line.

A lot is being said about me right now, and i want to clear the air. I used poor judgment in speaking with anyone other than my wife in ANY kind of flirtatious manner. I did not have an affair nevertheless, i crossed a line during a regrettable period in my life. In certain instances, it became inappropriate; I have addressed that and taken proactive steps to remedy this with my family. My wife and family is all i care about in this world. To be this naive and stupid enough to risk the only thing that truly matters to me was the greatest mistake i could ever make. I will never make it again. I will take full responsibility. We will get through it, and we will get through it together.

While Behati Prinsloo is yet to speak out about the cheating allegation, a friend of the couple revealed that she is upset but believes her husband that there was no physical affair.

However, after Adam Levine apologized for the messages he exchanged with Sumner Stroh, two other women, Maryka and Alyson Rose also came out with claims that the singer sent flirtatious messages to them. When asked for proof, Alyson Rose revealed she replied to some of the messages but decided not to share them because she feels uncomfortable doing so, and mainly because she feels bad for Behati Prinsloo.

On the other hand, Maryka narrated how Adam Levine slid into her DM, telling her how he was obsessed with her. Despite all these, Adam Levine and Behati seem unbothered about the allegations. The couple were spotted picking up their kids from school in Montecito, California and smiling in the presence of the paparazzi.

Myvipmodels.ch, a Talent Agency in Switzerland Supporting Bright Talents around the World in the Quest For Superstardom » TrendJamz